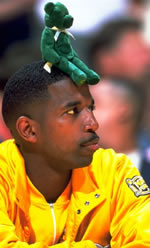 A.C. Green spent 16 seasons in the NBA, and won three championships with the Los Angeles Lakers spanning three decades (in 1987, 1988, and 2000), beginning with teammates such as Showtimes’ Magic Johnson, Coach Pat Riley, Kareem Abdul Jabbar, and James Worthy, and ending with Shaquille O’Neal, Kobe Bryant, Robert Horry, Derek Fisher, and Coach Phil Jackson. A.C. is the only player in Laker history to win championships in both the “Fabulous” Forum and Staples Center. A.C. also played with Charles Barkley and the Phoenix Suns, Dirk Nowitzki and the Dallas Mavericks, and Alonzo Mourning’s Miami Heat.

A.C. is known as the NBA’s Iron Man, having played in 1,192 straight games (surpassing Randy Smith’s 907 consecutive games played on November 20, 1997). A.C. was the Lakers’ first-round selection in the 1985 college draft, 23rd selection overall. He became the first Lakers’ rookie since LeRoy Ellis in the 1962-63 season to appear in every game. He was selected by NBA coaches to the league’s all-defensive second team in 1988-89, and was voted by his fans as a starter for the 1990 NBA All-Star Game. A.C. recorded a career high 35 points on January 15, 1994.

College Career:
A.C. attended Oregon State, and graduated with a degree in Speech Communication. During college, A.C. was a third-team All-American as a senior, and the 1984 PAC-10 Player of the Year. He led the Oregon State Beavers to the NCAA tournament three times, their most success coming during their 1982 “Elite Eight” appearance where they unfortunately lost to Patrick Ewing’s Georgetown Hoyas.

Community Involvement and Humanitarian Efforts:
Outside of basketball, A.C.’s heart is dedicated to working with youth. Because of his love for young people, A.C. established the A.C. Green Youth Foundation in 1989, with the main focus on sexual abstinence education. Through his “I’ve Got the Power” and “Game Plan” abstinence curriculum, videos, leadership camps, and web site, A.C.’s mission is to help young people build self-esteem and character, and learn moral and ethical principles which will help them make responsible decisions.

A.C. is a youth mentor, author, speaker, and successful businessman. His business interests have included ownership of numerous Denny’s Restaurants and a Hyundai dealership, as well as various entrepreneurial pursuits. A.C. is also in demand as a business consultant and lecturer.

A.C. is a role model that youth across America can respect, and for this he was recognized in the House of Representatives’ Congressional Record of October 26, 1999 and by President George Bush when A.C. attended a ceremony in the Oval Room during Black History Month in 2006. In the course of his business ventures and community service, A.C. has made speaking appearances across the world, in countries such as China, India, Mexico, Korea, Malaysia, and the Philippines. He has also appeared on television and radio programs throughout the country, including Oprah, The Today Show, Good Morning America, 20/20, Rush Limbaugh, Donahue, The Montel Williams Show, and The O’Reilly Factor.